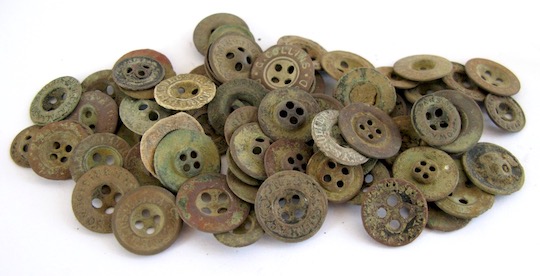 ‘Just a button’ is how Joe Tilt described one of his recent finds when writing on a detecting forum. In a way he was apologising to the members for ‘only’ finding a button. There was no need. His find was much more interesting than a hammered coin or Roman brooch where information is sparse or non-existent. The humble button spoke volumes and told us a lot about our recent social history.

Today we have Anti-Social Behaviour Orders (ASBOS) but in the middle 1800’s we had reformatory schools, a way to provide care for children involved in criminal or anti-social behaviour. In later times these young people were referred to as ‘juvenile delinquents’. It was a humble die-stamped two-piece copper-alloy button from an item of reformatory clothing Joe had unearthed.

Bedford Reformatory School, a penal institution for young offenders, was opened in 1857, with room for 30 boys. Its purpose was to provide an alternative to prison. The inscription BEDFORD REFORMATORY is surrounded around a beehive (called a skep) surrounded by flying bees and has a simple looped wire shank, not back-marked. Similar depictions of bees flying around the skep –   symbolising industry, diligence and effort and the concept that work is rewarding, can be found on many late 18th century tokens.

END_OF_DOCUMENT_TOKEN_TO_BE_REPLACED

*Rusty and in a Sorry State

In a previous post I looked at the detectorists’ database, the UKDFD. The item I revisited was a pen or fruit knife found in Aston Clinton, Buckinghamshire.  Another good example of a find telling us a lot about our social history. *‘Rusty and in a Sorry State’ doesn’t refer to me!

The picture below show a clean knife, but it was rusty and in a sorry state when rescued. Should have taken a ‘clod shot’ or video, but it wasn’t the fashion then. We were primarily metal detectorists with enough to lug around without a mountain of movie gear. In retrospect I regret not taking a ‘before’ shot showing its condition before cleaning.

Mrs John worked wonders with her diligent restoration and conservation skills so it now looks in almost pristine condition. Some details were easy to record. For example, it has a mother-of-pearl handle with two ‘stainless steel’ blades made by Fisher in Sheffield. But I was intrigued by the letters or meaningless word, IBAISAIC . What could it mean? Finding out proved to be a little more difficult.

I searched Mr Google with few positive results and it wasn’t until I proudly (well, I was a rookie swinger at that time) showed my find on a detecting forum that all was explained . . . by a former vacuum cleaner repair man! He told me that knives of this type were given by Hoover salesmen as gifts to retailers in the late 1930’s. This information has been confirmed by the manufacturer who told me to ‘take care of it because it’s a collector’s item.’ I’ve seen one for sale on eBay at £40 – £60.

END_OF_DOCUMENT_TOKEN_TO_BE_REPLACED

In 2016 or thereabouts Garrett started advertising ‘treasure hunting’ as a sport. They still are. At the time this fact dismayed many English detectorists who regarded their metal detecting as a hobby. What do YOU think?

It’s a well known fact that to take part in any sport you need skill and ability. Here’s just a few examples. They are not all mine, but  have been inspired by, borrowed, and adapted, by an entertaining piece I once read by Maurice Darling in an old detecting magazine.

Snooker – using a straight stick to knock a coloured ball into a hole, even after smoking endless cigarettes and consuming copious amounts of beer during the game. (It used to be like that!) You gain points by causing your opponent to foul.

Pool – same as snooker, except that you use a smaller stick and fewer balls. Beer is readily at hand. I had a friend who was an expert at this game of pocket billiards – as the game is also known in America.

Darts – darts has long been a bone of contention in the debate around what constitutes a sport, with some seeing it as the ultimate pub game.

Rugby – rugby is a free-flowing game that features a combination of strength, speed and strategy to move a ball into the opponents’ territory. Rugby is a full-contact sport. Be prepared to donate a pint of blood every two weeks.

Fishing – the challenge here is to find and catch a fish. Having accomplished that, you then throw the critter back. Actually, the only skill you need here is to stay awake and not fall in the water.

Football – you attempt to put a ball into the back of the other team’s net. If you do this then the only other skill you need is to be able to run the length of the pitch and give all your team mates a kiss after skidding along on both knees. Practice pulling your shirt over your head as you fall to the ground.

Detectorists are capable of all the sports above with few problems, but wielding and understanding a metal detector is far more demanding.

END_OF_DOCUMENT_TOKEN_TO_BE_REPLACED

This is the story of an inspirational long-distance runner who won two gold medals in 1908 and the memories rekindled by a detectorist digging in a Northamptonshire field in 2016.

There are certain events in history that most of us can recollect. Although you may not remember the date, you will know something about the eruption of Mount Vesuvius in AD 79, the devastation that occurred, and the petrified town of Pompeii. The volcano has spewed lava many times since, but not many will remember the eruption of 1906. If that event hadn’t happened, this tale may have turned out a little differently, but like all good storytellers, I must start at the beginning.

Justin Owens and his wife Helen live in Coventry, have been detecting for about eight years and are members of the Coventry Heritage Detecting Society of which Helen was/is secretary. They often make the journey from their Warwickshire home to Northamptonshire to detect with the well-established Central Searchers group run by Richard and Gill Evans. It was on one of their digs that Justin found something interesting, which forms the catalyst for this story.

The dig was in the Brigstock area and Justin was wielding his Minelab E-Trac as usual. He tells me that he’d been swinging uneventfully for about four hours and found ‘nothing’ of note. In a deadpan voice he commented, “and then it happened. I suddenly heard a good signal … and at about three or four inches found gold”.

Although I tried to elicit how he felt at the discovery, Justin was matter-of-fact and calmly stated that he showed it to Richard Evans who confirmed that he’d found a gold medal! And that’s where we really begin! So many column inches have been written about the finding of an object … this account is about what lies behind the find, the research undertaken, the history uncovered by diligent detectorists and a satisfactory conclusion.

END_OF_DOCUMENT_TOKEN_TO_BE_REPLACED

Subscribe to my blog - JOIN ME HERE - free and for nowt!

READ IN YOUR OWN LANGUAGE

International Ataxia Awareness Day is observed on September 25 every year. People with ATAXIA may have difficulties with balance and walking, speaking, and swallowing. This rare disorder can have an affect on one’s mental and physical well-being.September 25, 2022
4 months to go.
Loading Comments...
%d bloggers like this: