In 2o14 I published details of my chat with Mackenzie Crook. The muse has left me bereft of ideas for a new blog so this post has been resurrected. My regular readers might recollect it, but the original was lost and is no longer available.

On a stormy day at the beginning of a wet and soggy year and just off the busy M25 motorway, I met up with a ‘Caribbean Pirate’ carrying a rust-ravaged spear smuggled in the confines of his up-market man-bag.

The BBC announced that Mackenzie Crook was filming a comedy series in which he plays a ‘wannabee archaeologist’. The comments on online detecting forums ranged from how the show might be very entertaining and worth watching, to how it would be detrimental to detectorists and the hobby.

Some hoped that the hobby would be shown in a favourable light and it would be a case of ‘laughing with us rather than at us’. The doom-mongers forecast ridicule galore, detectorists wearing silly garb, driving old cars and living on the dole – all typical comments for a comedy show that has yet to be aired. My favourite was, “The show can’t be very good ‘cos it’s been shown on BBC4. The show will flop if it makes detectorists look silly!” We shall see …

Readers were told that they would see Crook draw on his own experiences as a metal detecting enthusiast ‘as he and his detecting partner Lance embark on a journey of greed, betrayal, rejection and redemption as they hurtle towards Danbury MDC’s greatest ever find. They both dream of finding that priceless hoard that will make them rich and cement their places in detecting history’ … but real life keeps getting in the way!

I was intrigued with that enigmatic introduction and after the subsequent comments from detectorists on forums and FaceAche.I was determined to find out more. To my surprise and delight the editor arranged to rendezvous with him at a well-appointed hostelry in leafy Buckinghamshire. I must say that I was both thrilled and just a little anxious … but I needn’t have worried.

For those readers who may need reminding, Mackenzie first came to prominence playing Gareth, the guy with the ‘character-actor’ face and funny haircut in the television show, The Office. That was 16 years ago. Since then he has never been out of work, appearing on the stage, in film (remember him as Ragetti in Pirates of the Caribbean?) and appearances in several television dramas. He said, “my face is my fortune!“

“I’m still star-struck when meeting people like Johnny Depp and Al Pacino, and I hope I always will be. I’ve been incredibly lucky. Detecting helps keep me grounded,” he explained. Mackenzie’s humour can be deadpan. Was the pun intended I momentarily wondered?

I warmed to him even more when, in a mild South London accent, he soon put me at ease by saying that he had been buying The Searcher for years and was also a subscriber!

Over refreshing glasses of amber coloured ale, I asked about the forthcoming programme. Contrary to the impression the BBC website may have given, it was very early days, because he was still fine-tuning the scripts. Picture © JW

There was still a lot to be done and filming wouldn’t start until June. Screening would probably be nearer the end of the year. His ‘pirating days’ were over and now the challenge was to write, star and direct in a show conceived by himself.

Mackenzie said (at least on a couple of occasions) he was keen that the metal detecting community would enjoy the show and stressed it wasn’t his intention to mock detectorists or the hobby. “The series will be a celebration of an all-absorbing pastime and the quirky people it can attract,” he assured me.

He smiled, nodded enthusiastically, and agreed that he probably had a lot in common with some detectorists … because he was often being called upon to play the geeky character!

Mackenzie has been detecting for eight years and started with a Viking VK30, upgrading to an X-Terra 305. He laughed as he related how his wife Lindsay referred to detecting as ‘your imaginary hobby!’ That reference, of course, is to the fact that he has all the know-how and equipment, but seldom has time to go out searching because he is so busy!

In the 1970s, when Mackenzie was just a boy, a children’s book by Kit Williams sparked his interest in the hunt for a valuable treasure. Some of you may remember Masquerade, because it caused quite a stir and gave clues to the location of an artefact in the shape of a golden hare.

It may come as a surprise to learn that Mackenzie isn’t a member of a club, on-line forum or any organisation to do with detecting, but seems to understand so much about what goes on, especially club dynamics. With what appeared to me as an evident lack of practical experience, I asked where he had gleaned his information.

“From reading The Searcher cover to cover, watching online videos and detecting on my own land”, was his answer. He agreed that he didn’t have much practical experience. The idea of knocking on a farmer’s door asking for permission to search also filled him with dread. Believe it or not, in real life this brave and swashbuckling pirate is a shy guy …

One of Mackenzie’s finds: Possibly from circa 1930’s deco period cast dress clip

According to the BBC the series, ‘taps into the world of the male hobby, which is very funny and touching.’ These words, coming from the BBC commissioner for the programme, have already upset several of the female detecting fraternity.

Although he would have preferred to leave out the offending word, Mackenzie explained that his show was an exploratory (and hopefully funny) look at a predominately male dominated pastime. “Men are completely obsessed by their hobbies whether it is model railways, stamp collecting or whatever! They can get so immersed and obsessed whereby a lady is able to keep everything in proportion … if you see what I mean.”

To emphasise the point, he gave me a short extract from one of the scripts. I don’t know if it was a joke resurrected and adapted from his years as a stand-up comedian, but it was funny and a good way of illustrating one of those fundamental differences between the sexes.

“I had a friend once who had a cactus. For 15 years he had that plant sitting on his windowsill until one day someone bought him a second cactus. From that point he couldn’t stop himself and within six months he had to move to a bigger house so that he had space for his cactus collection. Now, a woman could have two or three cacti and say, that’s probably enough cacti for me.”

I was interested to know if there was a stereotypical archaeologist in the script, somebody with a beard, flyaway hair and a knitted jumper. In a deadpan manner accompanied by just a hint of a twinkle in his eyes, he said, “Yes, there is an archaeologist … she’s a woman!”

Then he told me a little more about the programme, but prefaced his remarks with the reminder …

“I don’t want to give too much away you understand! The story that I’m doing is about two guys, their relationships and this hobby, which enables them to escape from the ‘madding crowd’ and find a refuge from the stresses of ordinary life. The majority of the time our two heroes don’t find anything. It’s not a rip-roaring roller-coaster side splitting hilarious comedy. In fact not much happens at all … just two middle-aged guys talking rubbish most of the time!”

He confided that the character he played was the more conscientious detectorist. His partner Lance (*the actor hadn’t been confirmed at the time of writing) plays the ‘treasure hunter’ with a liking for wearing full camouflage gear. * Toby Jones.

Like most detectorists he has a wish list, but his is ‘modest’ … a good condition hammered coin, but with some evidence of circulation wear; something Anglo Saxon and perhaps a piece of our social history that can be researched, an element of the hobby that he enjoys very much. Over the years he has collected and found many things like whole clay pipes and assorted flints.

I was surprised to learn that in ‘real life’ Mackenzie would have loved to be an archaeologist. History was one of his passions. His favourite television programme is Time Team, which he finds ‘brilliant’.

On his uncle’s farm in Rhodesia where he spent many a holiday as a child, Mackenzie went off exploring and found a cave adorned with primitive art on the walls. He proudly showed me the pictures taken at the time. And it was there, on the floor of the cave, that he found something special … the head of a spear. He dipped into the cavernous man-bag and proudly extracted the implement to show me.

I mentioned earlier that Mackenzie was a conservationist with his own eight acres of woodland in Essex, a site that he manages and detects. “Whenever I go up to my woods I always take the detector. I’ve never been on farmland.”

At one time Mackenzie contemplated buying a Ferrari, but his passion for conservation won through. I’m sure that his eyes took on an extra sparkle as he talked about managing the ancient woodland. “Now that I live in London” (in Peter Seller’s old house) “I wanted my children to appreciate the countryside as I have done. Sometimes we even camp there,” he told me.

After the chat and light lunch – wild boar sausages from Amersham for me (thereby lies a tale) – and bubble and squeak with bacon and poached egg for him, it was time to take pictures on the ‘sun-dappled terrace behind the elegant red-bricked exterior of the pub.’

Well, that was the plan. The sky darkened, the wind whistled and the hailstones pummelled off the parasols on to the paving stones. With the help of Mrs. John we managed to grab a couple of snaps before making a hasty retreat, saying our goodbyes and heading for home.

As we left the pub and joined the mechanised mayhem of the M25, I looked back and saw a double rainbow. You know, I’m sure that one end of the brightest arcs fell on the pub we had just left, pointing to the real treasure once contained therein … Mr. Mackenzie Crook.

In an email later, Mackenzie said that it was refreshing to do an interview where he got to talk about things that really interested him, instead of the usual banal showbiz questions. Next day I received a beautiful, original and signed piece of artwork showing a dejected detectorist holding a tin can … he looked very familiar!

In the meantime, perhaps I can enthrall you with the breeding habits of Mr. Crook’s elderly tortoises, Joshua and Josephine … if only I could find a metal detecting peg on which to hang the story!

Paul James “Mackenzie” Crook is an English actor, comedian, director and writer. He is known for playing Gareth Keenan in The Office, Ragetti in the Pirates of the Caribbean films, Orell in the HBO series Game of Thrones, and the title role of Worzel Gummidge. He is 50 years old – born 29 September 1971. 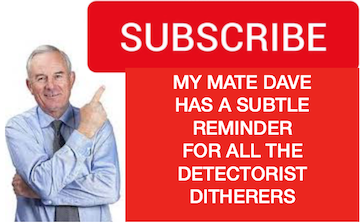